The schedule for the ICC World Cup 2019 has been released. The tournament will be held in England from May 30 to July 15, with a reserve day for the semi-finals and finals.

The format is such that each team will take on each other in a round-robin stage before the knockouts, with the top four teams qualifying for the semi-finals.

The final will take place at Lords, while the remaining matches will take place all over the United Kingdom. The eleven venues that will host the tournament are Lord’s, the Oval, Edgbaston, Trent Bridge, Headingley, Old Trafford, Taunton, Bristol, Chester-le-Street, Southampton and Cardiff.

The first match of the tournament will take place on May 30 at The Oval in London between hosts England and South Africa.

The Indian cricket team begin their campaign against South Africa on June 5 in Southampton. The reason for a delayed start for them is due to a request from the BCCI for a 15 day window between the IPL and an international match. Their much-awaited clash against rivals Pakistan will take place on June 16 at Old Trafford in Manchester.

There will be seven day-night matches throughout the tournament, with Australia playing the first one against Afghanistan in Bristol on June 2.

The round-robin stage will end on July 6 and the semi-finals begin on July 9.

Let’s take a look at the entire schedule: 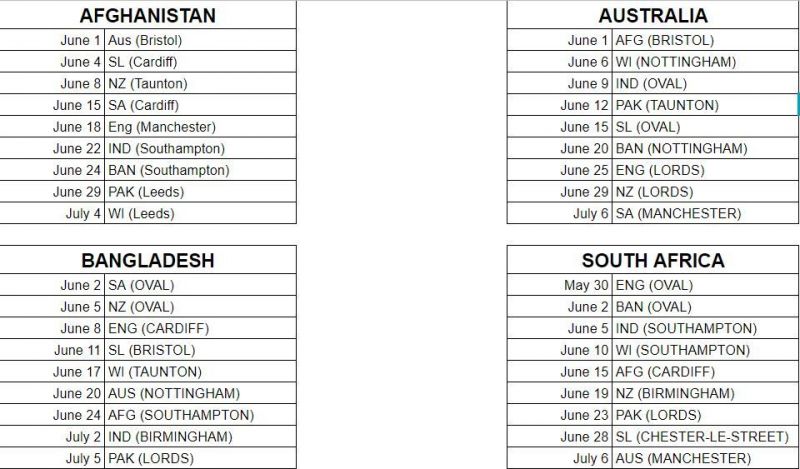