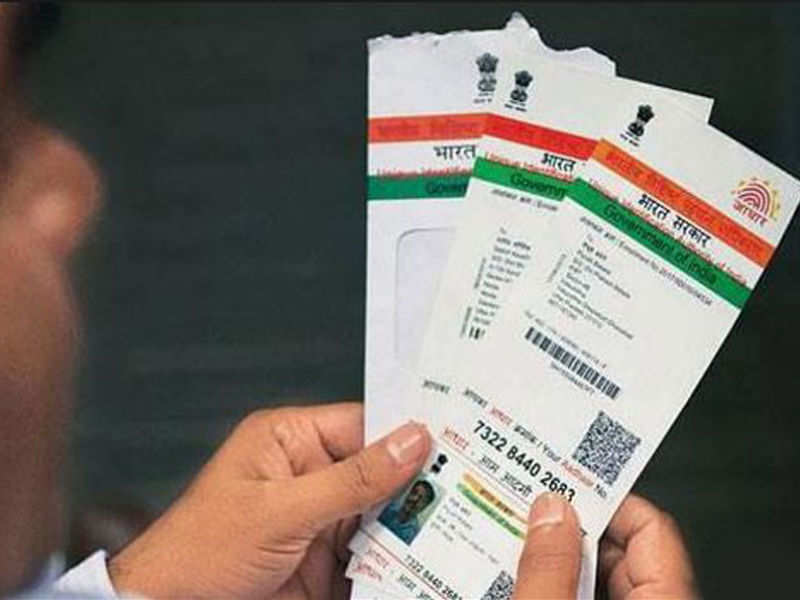 NEW DELHI: The UIDAI on Sunday sought to allay fears over data protection and privacy issues around the 12 digit biometric identifier, asserting that Aadhaar is an identification not a profiling tool.
It also stressed that Aadhaar data is governed by strong laws.

Fielding questions on Twitter in a live chat, Unique Identification Authority of India (UIDAI ) CEO Ajay Bhushan Pandey said that Aadhaar is based on minimum information and biometrics which is “least intrusive”.

To a specific query on whether UIDAI will go for DNA profiling in future, Pandey said that there were no such plans.

“We take fingerprint, Iris and photo…We have no plans to take something like DNA… photo, fingerprint and Iris is good enough for de-duplication, generating Aadhaar and to authenticate any person,” he said.

The UIDAI chief dismissed concerns that linking of various information with Aadhaar could lead to government monitoring, surveillance or possible misuse.

“When you give Aadhaar number in bank… UIDAI doesn’t know about your bank account. Bank gives us your Aadhaar number and fingerprint and UIDAI is a matching service. It says a yes or no, or we send a limited eKYC,” he explained.

The government does not get any information about the resident from the system, he said.

UIDAI further tweeted, “Aadhaar is an identifier not a profiling tool”.

During the question and answer session that lasted for over 1.5 hours, Pandey took over 20 queries that ranged from privacy concerns around Aadhaar to benefits of the biometric identifier for residents, and from linking of Aadhaar to mobile SIMs (subscriber identity module) to moving the enrolment centres to government offices and banks.

To another question, he said bank accounts are “property of citizens” and their linkage with Aadhaar number should not raise fears that government will one day freeze such accounts.

Maintaining that introduction of Virtual ID and limited eKYC had nothing to do with data leak stories pertaining to Aadhaar, Pandey said they were conceptualised for strengthening the privacy system.

The UIDAI recently announced a new concept of “Virtual ID’ which Aadhaar-card holder can generate from its website and give for various purposes, including SIM verification, instead of sharing the actual 12-digit biometric ID. The Virtual ID, a random 16-digit number, will give the users the option of not sharing their Aadhaar number at the time of authentication.

During the live chat today, Pandey said that since some people feared that information residing in multiple places could be linked despite it being prohibited under Aadhaar Act, the latest feature will give people the choice to mask their Aadhaar number.

“It has nothing to do with data leak story. I have said that in the last seven years, there has been no data leak from UIDAI ,” he said.

Pandey said that Aadhaar was protected by strong laws, and that Aadhaar Act is “based on the premise that privacy is a fundamental right”.
Citing the various Sections of Aadhaar Act he said that biometric data given to UIDAI cannot be shared without an individual’s permission, and that doing so is punishable. “No one can aggregate data and do profiling,” he pointed out.
Source by:- timesofindia
Share: